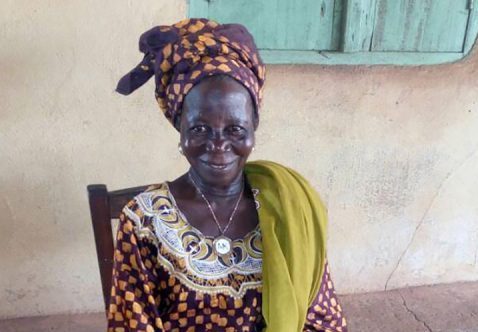 Mariama Kabba is a strong independent woman, and an inspiration.

No-one knows how old Mariama is because in those days people did not record Birthdays.  She knows she was born in the summer and she remembers the 1945 earthquake clearly, so the family think she is in her 90’s.

Mariama Kabba is the daughter of Madam Isata Camara (Maria’s great grand mother) who was born in Kánkàn, Guinea.  Kankan was founded by the Soninke people in the 18th century, after which it became an important trading centre, particularly for kola nuts which is her business to this day.  Madam Isata Camara was the third of three children.  She had a brother called Momodou Camara and sister named Mmah Camara.  They had family in Sierra Leone.  Isata’s father was called Fodie Camara and he was Koniaka-malinké from Mali.  He was born towards the end of the The Wassoulou Empire, sometimes referred to as the Mandinka Empire.

Isata married Pa Fodie Kabba and they had three daughters,  Mariama Kabba is the youngest.

Maria’s Grandmother, Mariama Kabba separated from her husband, Gaamoh Abdullah Bawoh because in her mothers words ” E nor bin dae take good care of am en e bin dae beatam”.  Sierra Leone has a long history of sexual and gender based violence, dating back to the colonial era and stretching into the years of independence which began in 1961. The country’s civil war, which raged between 1991 and 2002, brought international attention to the high levels of violence against women.  In this way, Sierra Leone is similar to many young democracies in Africa with a violent history; it struggles with patriarchal attitudes and high levels of violence against women and girls. This needs to change.

Mariama Kabba had the strength of character to leave the situation which was extremely rare for a woman of her generation and cannot have been easy.

Mariama Kabba was fortunate to re-marry and have three more children.  She married her cousin, Amara Kabba and together they had three children Jebbeh Kabba, Mustapha Kabba and Mariama Kabba who all lived happily in Sembehun 17, Bo town and Freetown.

Life in the village was simple but in many ways hard.  Farming life was too much for Mariama,  her daughter persuaded her to move to Bo town. Even to this day the family cannot convince her to leave Bo and live in Freetown. She is happy in Bo surrounded by lots more family.

Beyoncé wrote the fabulous feminist anthem “Independent Women”.  Well the girls in Africa can get down like that, and have been for centuries.

To this day Mariama Kabba is a strong, independent woman.  She’s the type to quietly look a challenge in the eye and give it a wink!

Mariama is an entrepreneurial soul, and like many many women in Sierra Leone makes her own money by small scale trading.  For years she had sold kola nuts and snuff.  The Coca Cola Company has competition in Bo, with Mariama Kabba.  The kola nut is the fruit of the kola tree, a genus (Cola) of trees that are native to the tropical rainforests of Africa. The caffeine-containing fruit of the tree is used as a flavoring ingredient in beverages, and is the origin of the term “cola”.

Human use of the kola nut, like the coffee berry and tea leaf, appears to have ancient origins. It is chewed in many West African cultures, in both private and social settings, as a source of mental stimulation.

Kola nuts are an important part of the traditional spiritual practice of culture and religion in West Africa, particularly Niger, Nigeria, Sierra Leone and Liberia.  They were used as a form of currency in such West African groups as the Malinke and Bambara of Mali and Senegal. They are still used as such today in certain situations such as in negotiation over bride prices or as a form of a respect or host gift to the elders of a village should one move to a village or enter a business arrangement with the village.

Finally it is important that we mention, that Mariama Kabba is a great cook.  Maria (Bradford’s) early memories of her grandmother visiting her family in Freetown was that she would come with gifts in the form of fresh produce.  She’s very resourceful and can make a mean meal out of nothing.  Maria would look forward to her visits and recalls that she would always complain and say her daughter (Maria’s mother, Fatmata) was wasteful and would use too much fish or produce.  Mariama Kabba taught Maria the importance of making a little go a long way, lot’s of ways to be efficient and the power of fresh ingredients.

Without Mariama Kabba handing these lessons down, taking the time to teach and share there would not be Maria Bradford and there would be no Salone Fire, no Salone Spark, no African inspired drinks and mixers and no Shwen Shwen.

Like so many women in Sierra Leone, Mariama Kabba is the full circle.  She has demonstrated throughout her long life that she has the ability to create, nurture and transform.  She has been an inspiration to Maria Bradford and her family in so many ways.